Despite its relatively recent inception, Val di Sole Bike Land is synonymous with great racing. Daolasa di Commezzadura in Trentino, Northern Italy is preparing to host a World Championship race once again. This time, it’s the turn of Four-Cross, the most unpredictable and adrenaline-inducing discipline in mountain biking.

Expect spectacular overtakes and bold maneuvers  where Val di Sole Bike Land will host the world championships for the fifth edition in a row, a trend set to continue until 2021.

A short head to head race where 4 riders start together and battle down the 600-meter track, it’s one characterized by jumps, banked corners, and numerous obstacles. It’s a garden for those acrobats ready to take on one of the most technical circuits internationally. The Four-Cross circuit runs alongside the famous Blake Snake, and in addition to the Pro-Line, it’s characterized by 3 long and challenging double jumps. It includes a very technical section in the middle with many jumps, where you’ll see the athletes try to overtake each other with daring acrobatic maneuvers.

Frenchman Quentin Derbier and Czech Romana Labounková will defend the crowns they won in last year’s race. High expectations exist in the men’s race for Giovanni Pozzoni. In 2017, the home rider gave Italy its first medal at the Four-Cross World Championships since he grabbed silver at the 2013 European Championships.

The 4X track can only be accessed during official training sessions for the 4X competition. 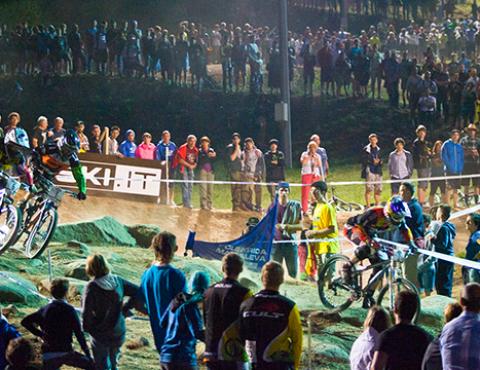